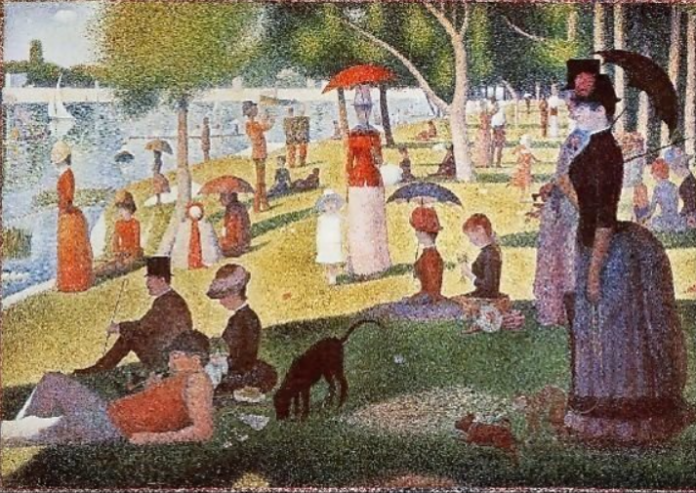 Georges Seurat was born in Paris to a wealthy family – his father, being a legal official, worked with the government. Georges first studied drawing under the sculptor Justin Lequien during night school. He was later accepted into an art school named ‘Ecole des Beaux-Arts’ in 1878.

After two whole years of study, he went through a year of service in the military, after which he returned to Paris. When back home, he moved into his studio and spent the next two years wanting to master the technique of the black and white drawing process. Georges then studied the science behind the color theory, from where his idea of color perception grew.

This technique that he was developing then operated like that of our television screens today, the thousands of colored pixels combined to make up for a whole scene. Georges also used the recently discovered theory of complementary colors, which gave his painting a newfound life, all of this being way before his time.

Most art enthusiasts know that Georges Seurat (or Georges Pierre Seurat) is a renowned French painter born in 1859 in Paris. He is the founder of the 19th-century French school of Neo-Impressionism, and his technique, of portraying the play of light through his tiny brush strokes, made to come alive with contrasting colors, came to be known as Pointillism.

Georges Seurat used his technique of Pointillism to create humongous compositions with small, individual strokes of vibrant color, too tiny to be distinguished when looking at the entire piece at once, but making his paintings have a lot of character, thus making them stand out from the crowd.

It was 1883 when Georges Seurat painted his first major painting, ‘Bathers at Asnières’, an intriguing yet important painting that showed young men relaxing in a busy suburb of Paris, near the Seine.

What Is Georges Seurat Famous For?

If you have heard about George Seurat painter but haven’t figured it out, he was best known for the establishment of Chromoluminarism and Pointillism, a Neo-Impressionist art technique. Most of Georges Seurat’s paintings depict moments of pure Suburban leisure, such as ‘A Sunday on La Grande Jatte,’ ‘Une Baigna,’ and ‘Bathers at Asnieres,’ to name a few.

Being the founder of the 19th-century French school of Neo-Impressionism, Georges was an artist who creatively made things like the use of paint simple. He spent his time carefully forging tiny dots with his brush, making tiny strokes- full of character, with varied palettes of contrasting colors, to portray the play of light without a ridiculous fuss.

How Did the Word’ Pointillism’ Come About?

Though few seem to know of this, a branch of Impressionism was developed by Georges Seurat, alongside Paul Signac. During that time, around the late 1880s, art critics used the term ‘Pointillism’ to mock these artists (every great artist goes through a few rough patches before the big breakthrough). Although now, the term has been reclaimed and is used without the negative, not so pleasant burdens it once carried.

How Did Georges Seurat Come Across the Idea for His Pointillistic Style?

One of the most asked questions to any artist, be it a painter or someone who makes sketches, is how they came across their art style? Well, Georges has a relatively straightforward answer to this. When it came to Georges Seurat, he loved to explore the science of optics and color.

He was passionate to such an extent that Georges discovered that rather than mixing multiple paint colors on a palette, he could place a range of dots/strokes of different colors beside each other on his canvas, and his eyes would mix them for him, just like that. He called this same method of painting, Divisionism. Though the style is now referred to as Pointillism, as mentioned earlier.

When Did Georges Seurat Gain Popularity?

Roughly around the mid-1880s, Georges Seurat’s Pointillistic (or call it Divisionistic) style and painting technique had gained popularity far and wide. Georges Seurat is considered one of the greatest, most important post-impressionist painters. He developed an outline for his art in a monumental way to depict modern urban life. Georges Seurat’s painting ‘Bathers at Asnières’ is one of his significant early works.

Georges Seurat began his journey of Neo-impressionism with his painting ‘Sunday Afternoon on the Island of La Grande Jatte,’ which is also his most famous painting. With this painting, Georges Seurat altogether changed the course of modern art and has come to be a great masterpiece of the century.

What Did Seurat Use for His Paintings?

When composing the forms on his paintings, Seurat used three primary color pigments: red, yellow, and blue. He came to understand from his scientific studies of light and color that a rather amazingly astonishing phenomenon called optical color mixture occurs when viewed from a distance, as the eye weaves the colors together to make new ones.

What Legacy Did Georges Seurat Leave Behind?

Georges Seurat’s work has helped advance the theory of Impressionism and has opened the way for multiple new possibilities in modern art. All of this was a significant achievement for a young painter back then. By the time he peaked in his youth, Georges Seurat was an all-around artist, the age of 25.

Pretty driven and inspired at a young age back in that time. Not forgetting to mention that Georges Seurat’s work has had a mighty influence on his followers like Camille Pissarro, Henri-Edmond Cross, Paul Signac, and a range of well-known Post-Impressionist painters like Van Gogh, etc. Numerous art schools were also affected by Georges Seurat’s color theories, like Fauvism and Les Nabis.

Paintings by Georges Seurat are still hung up in some of the best art museums globally, notably the Musee d’Orsay and other museums in Paris.

Georges Seurat is best recognized as the creator of the Neo-Impressionist style known as Pointillism or Divisionism, which is characterized by a gently flickering surface of minute dots or strokes of color. His inventions were inspired by new quasi-scientific theories about color and expression, yet the exquisite beauty of his work may be explained by the impact of many diverse sources. Initially, he thought that great modern art would reflect contemporary life in ways comparable to classical art, but with technologically informed approaches.
Later in life, he grew increasingly interested in Gothic art and popular posters, and the impact of these influences on his work makes it some of the earliest modern art to employ such unusual forms of expression.

Taylor Swift Eye Colour – What is Color OF Her Eyes

What is An Auditory Hallucination?: All You Need To Know

5 Tips on Getting Rid off Bad Stuff in Your Life