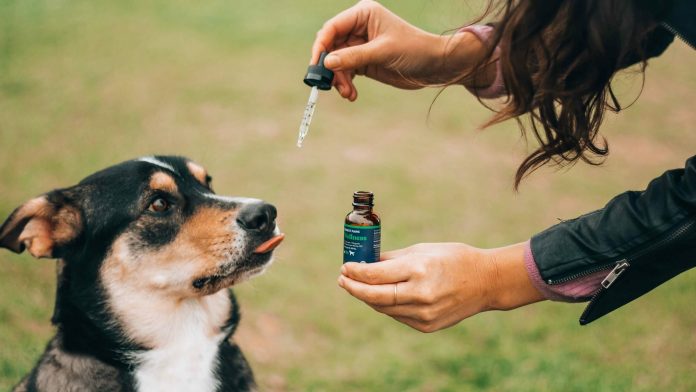 The endocannabinoid system in your dog’s body is a messenger system. Among other things, it helps regulate sleep, hunger, pain, and the immune system. Using CBD for dogs activates the neurological, digestive, and immunological techniques, as well as the brain, by influencing the action of the messengers in this system.

CBD for Dogs: What Are the Benefits of CBD Oil?

Let’s take a look at some of the most prevalent conditions that CBD may help with in dogs:

Dog allergies are on the rise, and they’re also challenging to treat. As a result, allergies are a significant cause of euthanasia in dogs. One of the most common reasons for vet appointments is skin disorders in general.

The endocannabinoid system is also present in the skin, which is great news for pets who suffer from allergies. It means that CBD oil may help relieve dry and itchy skin. It may also encourage the formation of new, healthy skin cells.

Anxiety is one of the most prevalent reasons dog owners seek CBD oil. Anxiety can manifest itself in a variety of ways, including:

In addition to the anti-anxiety medications, which are easily accessible, the use of CBD for dogs is being researched for anxiety because it has minimal side effects. Moreover, animal studies show that there are antidepressant properties that can have an impact on humans as well as animals.

When your dog is agitated, CBD oil for dogs might act fast if given straight by mouth. The working time is usually between 5 and 20 minutes. However, cannabidiol appears to be most effective for anxiety when administered over time. Therefore, a daily dose may be the best option if your dog is prone to anxiety.

Researchers studied stress in rats exposed to cats in a 2012 study. The rats given multiple doses of CBD were less anxious than those given a single dosage. Serotonin can control a person’s appetite, sleep, digestion, behavior, mood, and more. According to experts, cannabidiol can help in the regulation of serotonin. However, researchers are still unsure how it can help eradicate anxiety and stress.

Cancer is a severe health danger for dogs, especially if given chemotherapy or radiation. Unfortunately, cancer affects almost half of all adult dogs. Cancer experts are constantly searching for new ways to treat cancer and alleviate the pain and nausea that it can cause. CBD oil has also been studied extensively as a cancer-fighting agent.

Other animal research has shown that CBD oil has cancer-fighting properties and can halt tumor growth. CBD oil inhibited the growth of breast cancer cells in mice in research. In addition, according to a 2018 study, researchers discovered that cannabidiol could help mice suffering from pancreatic cancer live longer.

Researchers also suggest that cannabidiol inhibits a cannabinoid receptor called GPR55. It is also important because the same element accelerated the proliferation of cancer cells in mice. As a result, a lot of cancer treatment causes nausea, and cannabidiol oil may help them.

The pain research on cannabidiol is perhaps the most promising. It’s effective for everything from nerve pain to arthritis, without the adverse side effects of painkillers.

CBD binds to CB1 and CB2 receptors in the brain and nervous system, altering how your dog’s brain perceives pain. CBD can also assist with the other symptoms that come with pain, such as insomnia and nausea. Furthermore, CBD may also aid in treating acute pain caused by injuries.

If your dog suffers from joint pain, your veterinarian may give NSAIDs or other pain relievers such as Gabapentin. However, NSAIDs can lead to joint and soft tissue degeneration. Gabapentin can potentially damage the kidneys. They can also harm your dog’s liver.

CBD for dogs might be a natural anti-inflammatory with minimal pharmaceutical side effects. It operates by attaching to the CB1 receptors present in your brain. These receptors boost the immune system, which helps to reduce inflammation. CB1 receptors also change how the brain reacts to pain.

Cannabidiol binds to CB2 receptors in the neurological and immunological systems, among other places. When this happens, the body can naturally produce more cannabinoids, which helps reduce inflammation and discomfort even more.

The following are some of the most typical reasons why people buy CBD for dogs as an anti-inflammatory for joint problems:

Seizures affect roughly 5% of dogs, according to estimates. Furthermore, they can be frightening to both pets and their owners. Most veterinarians use antiepileptic medications to help with epilepsy and seizures. Phenobarbital or potassium bromide are two common alternatives. But, on the other hand, these medications are exceedingly dangerous to your dog’s liver and other organs. And even if the substance doesn’t have uncontrollable adverse effects, they aren’t always practical.

When Colorado State University researchers looked at CBD as a treatment for epilepsy in dogs, they were ecstatic. CBD reduced seizures in 89 percent of the dogs who got the CBD. Cannabidiol even helped patients with drug-resistant epilepsy in human trials. Within 4 to 5 months, 7 out of 8 participants in one research reported a significant improvement.

When Colorado State University researchers looked at CBD as a treatment for epilepsy in dogs, they were ecstatic. The dogs who were given CBD saw an 89 percent reduction in seizures. Cannabidiol even helped patients with drug-resistant epilepsy in human trials. Within 4 to 5 months, 7 out of 8 participants in one research reported a significant improvement.

Aberrant electric charges cause seizures in the nervous system’s neurons. CBD, on the other hand, can attach to brain receptors. Researchers believe this might help the neurological system function better. Because CBD interacts with the endocannabinoid system reduces the frequency and severity of seizures.

In A Few Words

Internally, the cannabidiol may aid your dog with allergies, and topically, it can help with hot spots and interdigital cysts. Now that you know why you might want to give medicated cbd oil to your dog, you can focus on picking the right product for your adorable pets.

Read also: BLINDNESS IN DOGS – SIGNS AND SYMPTOMS OF VISION

CBD Gummies – Can They Relieve Anxiety?

Why Use Green Malay Kratom?

Career In Aesthetic Medicine: Why It Is A Positive Career Path